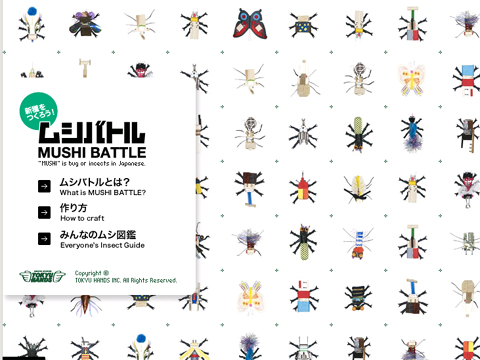 “Mushi Battle Project” is an experience-based event held at Tokyu Hands during the Golden Week, along vacation week in May. This battle is not a virtual reality but a wrestling battle of hand made paper insect. All the insects made in 19 branches of Tokyu Hands were documented by digital cameras, and sent to the office immediately, the image was touched and uploaded to the web as an internet insect picture book. There were more than 3000 insects! The project is a homage to Tokyu Hands which is very particular about “hand-made”. The project is expanded to the poster making in the store and the participation at the Good Design Expo 2008.