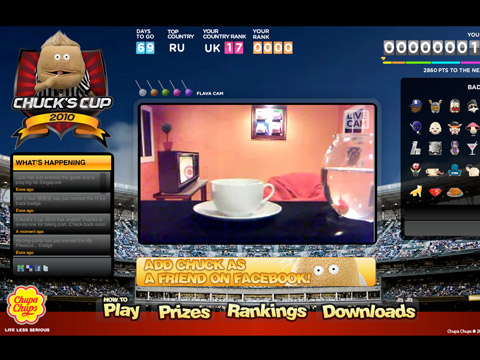 Chupa Chups wanted to leverage on World Cup fever to increase their brand presence in football-loving countries. However, they didn't want to spend the millions needed to become an official World Cup sponsor. Football is a game where you need strength, stamina and no small amount of skill. We wanted to do the opposite: create something anyone from anywhere could take part in, while at the same time staying true to the Chupa Chups motto of a 'Life Less Serious'. So we thought: why not create our own 'less serious' version of the World Cup, fronted by Chupa Chups's enigmatic mascot Chuck? Thus, Chuck's Cup 2010 was born. A worldwide tournament where all you had to do to represent your country was sit down, log on, and... look at a teacup that belonged to Chuck. A game anyone, anywhere with internet access could take part in. Visit site.