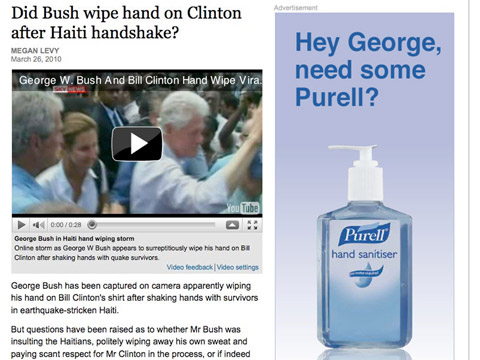 When the story broke about George Bush wiping his hand on Bill Clinton’s shirt after shaking the hand of a Haitian earthquake survivor, it was crying out for a response from Purell Hand Sanitiser. Since the story, and the telltale video, were all over the internet, a banner ad was the obvious way to go. It had to happen fast. The client appreciated the relevance and immediacy of the idea and gave us instant approval. Media was arranged and the ad was produced and uploaded in a matter of hours, hitting the relevant sites while the story was still fresh.